Skip to content
Moldovan Institute for Human Rights (IDOM) > News > News > In cooperation with youth centre ARTICO, IDOM’s volunteers decided to start a series of human rights workshops for youngsters between the age of 14 to 25 years old 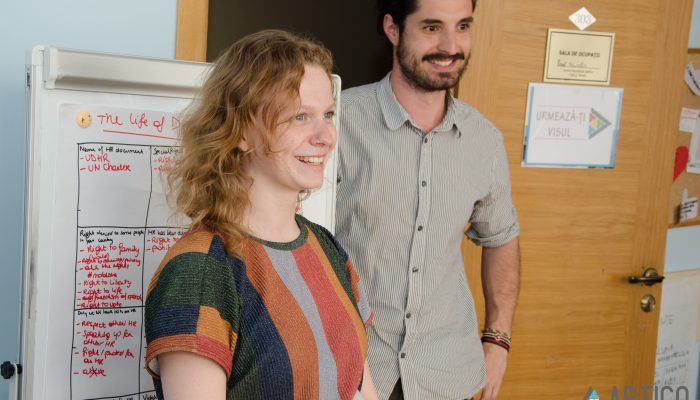 The idea was born when the volunteers came to realise that a barrier remains between the legal world and the average citizen, even when the human rights branch of the legal world exactly fights for the rights of this average citizen. Law – not only in the Republic of Moldova, but in many societies –  it is often still considered an ivory tower, an area of society that is remotely dealt with only by academics, scholars and practitioners who are just in it for the money. However, especially when it comes to the branch of human rights, the legal area is actually a very important remedy for citizens in order to live a quality and dignified life. Very often, it seems, there is a phenomenon of ‘not knowing’ about one’s own human rights as well as how to enforce and defend them due to a lack of education thereof.

In order to overcome this barrier between the legal branch that aims to aid citizens to defend their human rights on one hand and the actual citizens who, on the other hand, are often not aware of these rights, nor are they familiar with the general legal area, our volunteers took action. They decided to start up a grassroots initiative to educate young people and to encourage their political awareness and their sense of citizenship. On top of that, these workshops could offer a first opportunity for young people to come into contact with the legal area and possibly even stir a professional interest!

Working closely together with another EVS volunteer from ARTICO, the youth centre allows IDOM’s volunteers to use a space, materials and their social media channels to conduct a series of human rights workshops. The idea of these workshops are to learn about human rights (in English) through interaction, discussions, role-plays, quizzes, brainstorming and other activities. Our qualified volunteers, who both have a background in international law and human rights, moderate the sessions and provide the necessary theoretical framework to carry out the activities properly. Hence, participants not just learn textbook material knowledge on human rights, but actively engage with each other’s experiences and opinions, which are equally valuable to learn from. Every other Thursday at 16:00, a different human right will be dealt with in ARTICO, free of charge and open to any young participant interested.

Last Thursday on 11 April the first session took place, in which around 10 young people took part. The main focus of this workshop was a general first grasp with the topic of human rights and aimed at analysing the overall familiarity, knowledge and experience of young people regarding the subject. During the first activity, the participants were asked to fill out – in pairs or by themselves – a quiz sheet with several questions related to human rights and everyday life experiences. Later on, all the answers were gathered on a flip chart and participants were encouraged by our volunteers to share their opinions and thoughts on the overall findings, guided by our volunteers’ introduction of the theoretical framework of human rights.

The second activity was a bit more physically “challenging”, as all participants were asked to situate themselves on a straight line between two papers on each side of the room, respectively stipulating “I agree” and “I don’t agree”. Depending how well the participants would (not) agree with the statement read out loud by our volunteers, they had to physically place themselves on the line. This resulted in a visual and real-life representation of the differentiation of opinions regarding the statement in question. Examples of the statements in questions were “It’s more important to have a home, food and basic necessities than to be able to say what you like”, “It’s impossible to eradicate poverty totally” and “Some people have, naturally, more rights than others”.

IDOM’s volunteers would then ask every participant, who was willing, to elaborate a bit more on their position. It was allowed and even encouraged to change positions after hearing others’ opinions and to defend their own. All participants were very keen on sharing their knowledge and point of views and a few persons regularly changed place, due to opening up to others’ opinions and therefore adjusting one’s own perspective. It was, both for the participants as well as for the volunteers, a very instructive and fruitful afternoon.

The first session was hence a great success and our volunteers left with a strong feeling of satisfaction. The first seed of strong political youngsters has been planted. To be continued on Thursday 25 April at 16:00 in ARTICO, room 303.