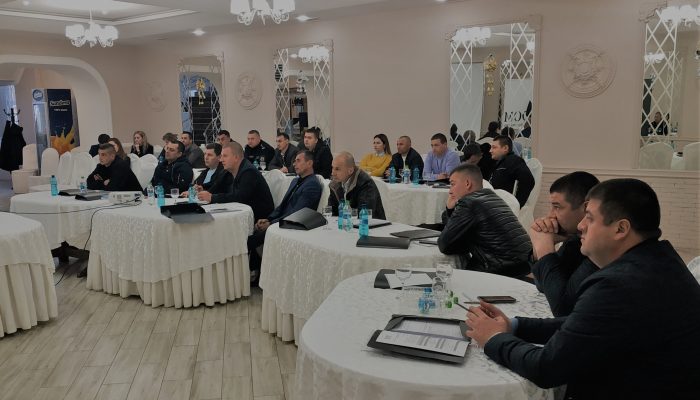 Thanks to the financial support provided by Sweden in accordance with the Cooperation Agreement with the General Police Inspectorate (GPI), the Moldovan Institute for Human Rights (IDOM) carries out monitoring of detention conditions of persons held in police custody, trainings, strategic litigation, and monitoring of psycho-neurological boarding houses and of psychiatric hospitals regarding the respect for rights of persons with disabilities.

In this sense, on 3 and 4 April 2019, IDOM organized a training in Edineț that aimed at strengthening police capacities of overcoming the deficiencies that generate infringements of the right not to be subject to torture and inhuman and degrading treatment in remand facilities. Twenty members of staff of PI of various districts benefited from the trainings.

Ion Sîrbu – Head of Detention and Escort Section of the Judicial Police Service of GPI, opened the event by speaking about the developments regarding the respect for the rights of persons held in police custody.

Svetlana Doltu, Member of the Torture Prevention Council, spoke about securing the right to health in the PI, especially referring to the ECHR Judgments on Health, relevant to the Republic of Moldova; the rights of apprehended/detained persons, which are considered of special importance by the CPT; the Nelson Mandela Rules; and about the manner of securing PI medical activities.

Arcadie Astrahan, Director of Mental Health Community Center, Botanica district, expert in mental health, spoke on the second day about the importance of the respect for the rights of people with mental impairments and of injectable drug users held in police custody.

Dumitru Russu – Coordinator of the Monitoring and Reporting Program of IDOM, presented the Equity Concept, referring to the international and national legislation on discrimination; he spoke about ECHR caselaw on Article 3 (right to not be subject to torture, inhuman or degrading treatment) in cases of detention of persons with disabilities; about Law no. 60 on the Social Inclusion of Persons with Disabilities; explaining in detail the term of “reasonable accommodation.” A separate chapter was dedicated to the Convention on the Rights of Persons with Disabilities.”